Off to see a pantomime with Nan and Pop today. Because Gx was away we took  Lx’s friend Lucy with us to use the spare ticket. After some “its behind you”s and some “oh no you didn’t”s at Sleeping Beauty we all headed to Zizzis for dinner before coming home. The younger ones were ready for bed by the time we got back! 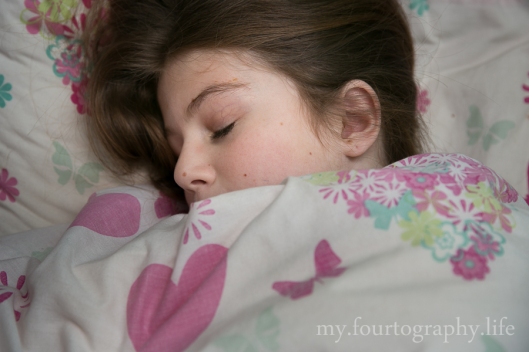 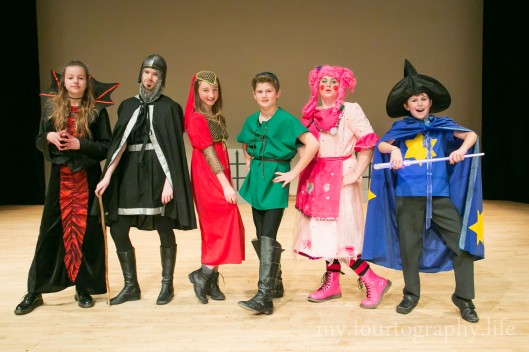 Today was all about the pantomime – the morning was spent making up posters and printing them and then off to the theatre for the dress rehearsal (and taking photos). Then an afternoon performance at 4.30, a quick break and another 7pm performance.

We were all exhausted afterwards – but Sx went off to a sleepover straight after and apparently didn’t go to bed till 4am. Takes a lot to tire Sx out!! 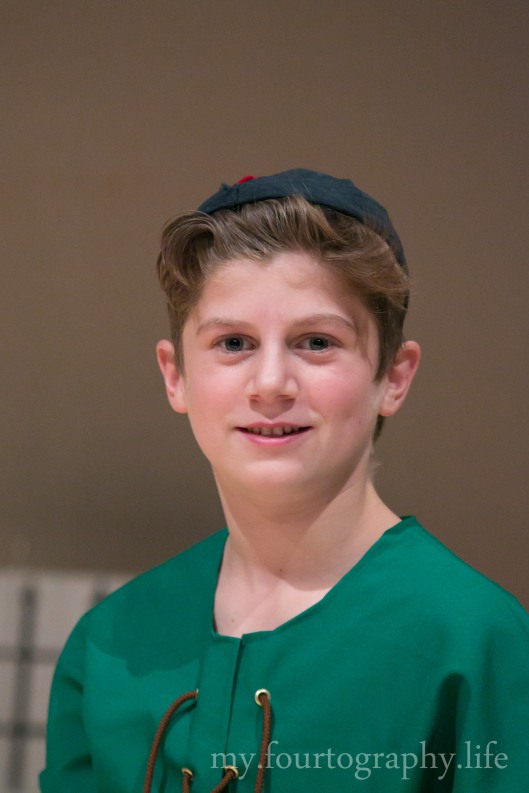 Yep its that time already – dress rehearsal for the pantomime (oh no it isnt!! Oh yes it is!!!) This year the two older boys are in a local childrens production of “Robin Hood The Pantomime” 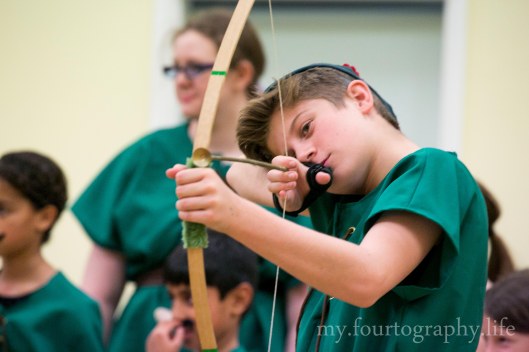 So I was there to photograph it (to get a feel for what happens when, to take photos for the posters and to get the kids used to me being there – ready to shoot the “real” photos tomorrow)

Sx is Peter Pan (the lead role) and Gx is Merlin (the comedy role). Both well suited to their roles. Gx makes me laugh with his silly faces through out- and Sx’s voice makes me want to cry it is so lovely! 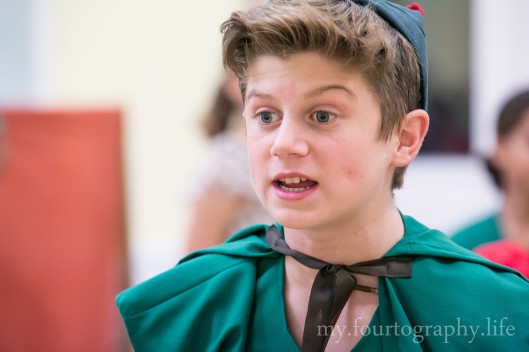 After appearing in a panto, going to a panto with Matt and I – today was the day for a panto visit with the grandparents. 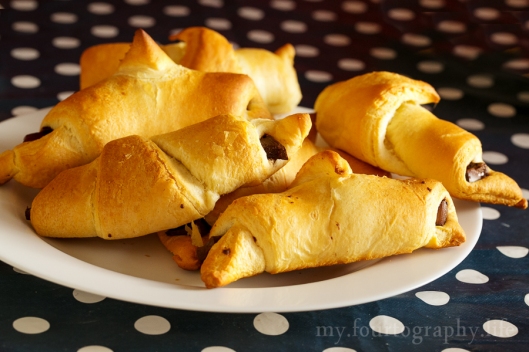 Then over to the theatre in pouring rain, gusting wind and hail and lightning. Luckily it had stopped by the time we got there.

The children went to the pantomime and I got a couple of hours to look round the shops, have a quiet hot chocolate and some reading time on my kindle before meeting up with them again and going for a meal.

They were all exhausted so I was firm and sent them all to bed when we got back. Then time for me to relax too with a glass of wine and the television. 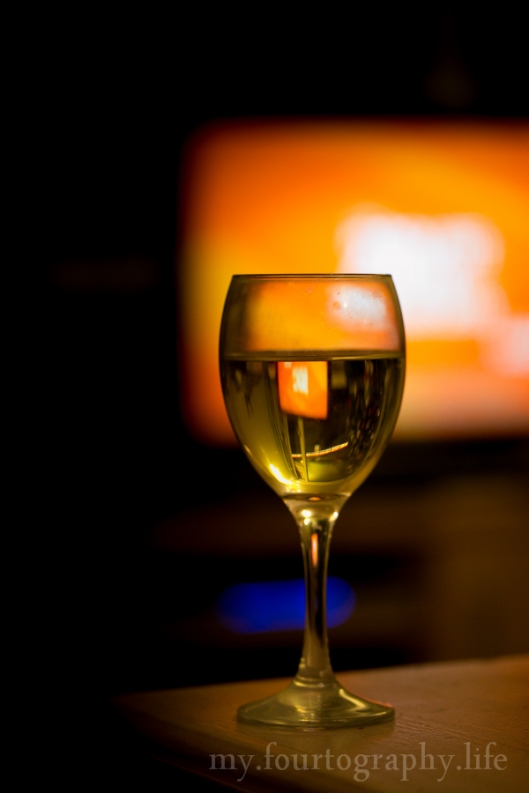 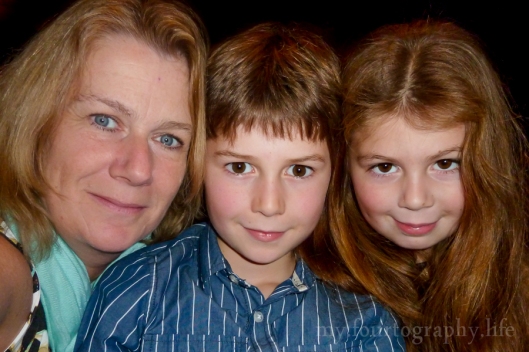 Today was our turn to go to the local pantomime – Jack and the Beanstalk. Sx was supposed to come with us but got invited to an all day paintballing party with some of his new friends from secondary school so I had given him the choice of doing that or coming with us. I was touched that it was actually a really hard decision for him – but he chose the party.

Matt came with us and we all enjoyed all the usual “its behind you!!!” and the silliness. Gx was especially interested in seeing a professional “dame” after his own performance last week.

And the interval seemed a perfec time for some photos including some with me and the children. 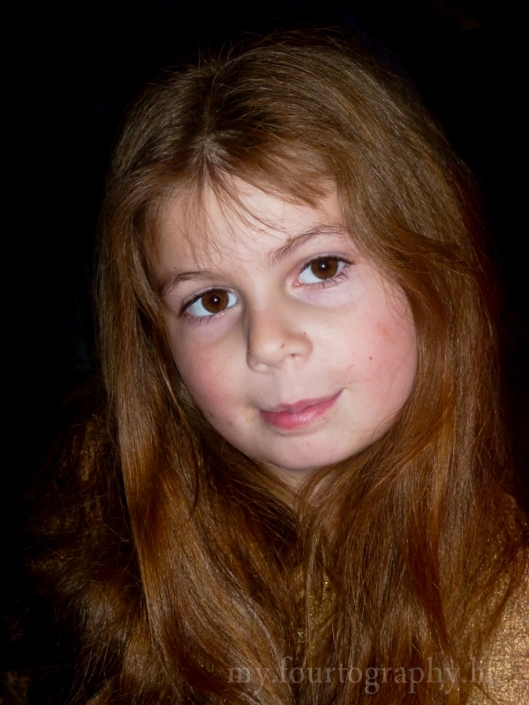 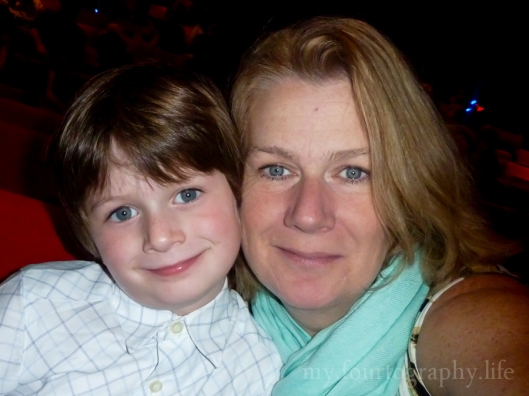 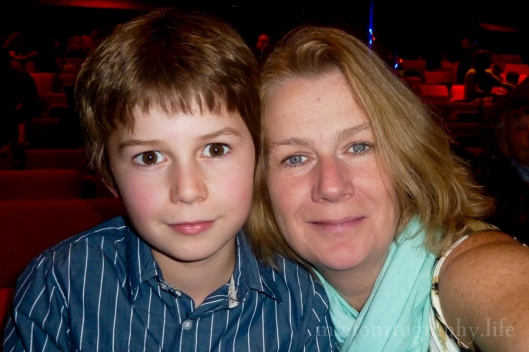 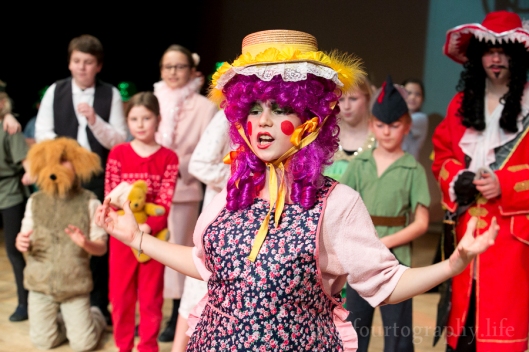 A long day for everyone today not helped by me feeling full of a cold. Sx Gx and I set off for the theatre for a run through before the show. It was a good job I took photos yesterday at the rehearsal as they didn’t have time to do a full run through of the whole show today but just picked out bits and pieces.

Then it was time for the matinee. I was so proud of both boys – Gx was just amazing and managed to stay in character throughout and got some great laughs. I was also impressed by his tennis skills as he served packets of sweets into the audience! 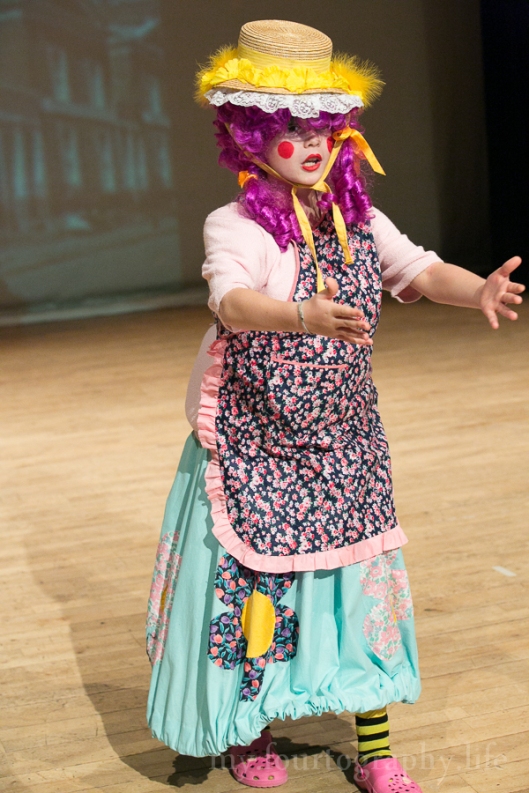 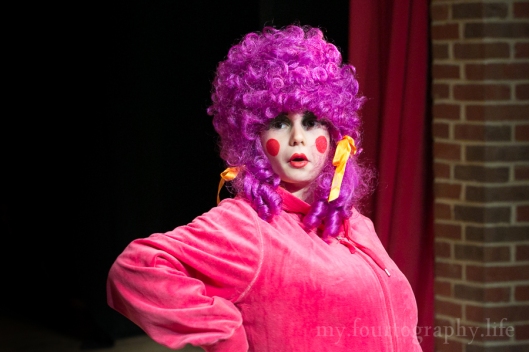 And Sx did really well as a pirate – with some great facial expressions some comic lines and some real enthusiasm in the songs. 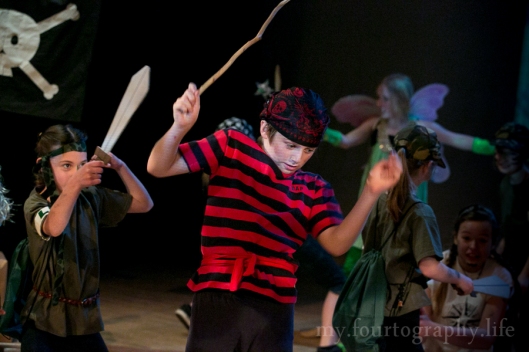 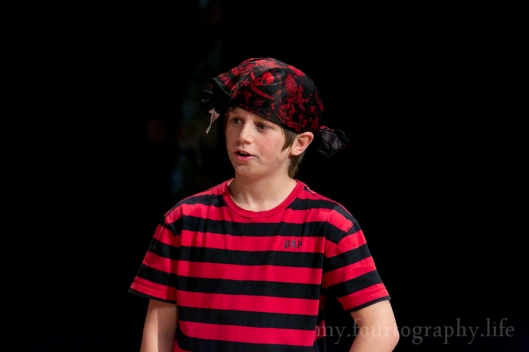 An hour off (and a chance for me to get some group shots) and then on to the evening performance. I was shattered by now so was really impressed with how the children kept going throughout and put on a fantastic performance. Then at 10pm we were all off home – and straight to bed for everyone including me!!

The rambling part…
Gx had a party this morning but we kept Sx home from rugby as we felt it was too much of a rush to get him back home in time for today’s main event…the pantomime! 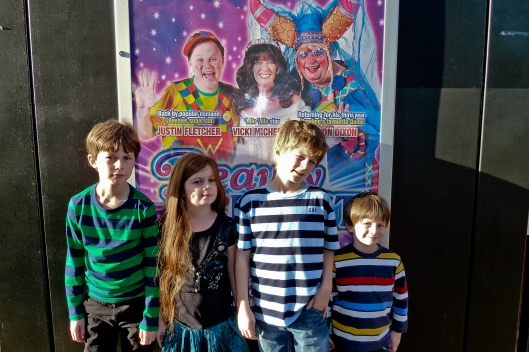 We went to see Beauty and the Beast – starring one of the little children’s favourite TV performers – Justin! For them it’s as good as watching the Queen perform on stage – he is just as famous in their eyes and they loved it. 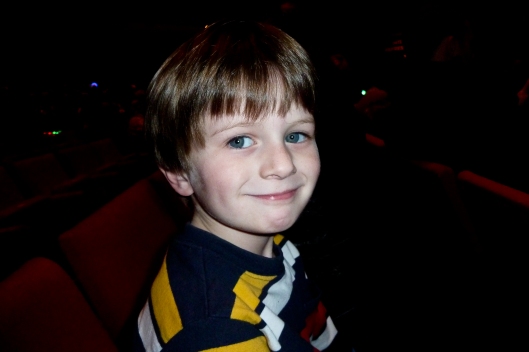 It is the third year he has been in pantomime here and he is already booked for next year too – which is fine by us as they are consistently good, traditional and funny – with songs the children know and a good mix of jokes for the children and the adults.

We even got snowed on!

It had been a tough day as Sx had decided he hated me 😦 he wanted to move out, find a new family – or even better if I could move out as he got on with everyone else in the house and would like to stay with them but didn’t want to be with me. He is very upsetting when he gets like this (brought on by me asking him to pick up his underwear from the bedroom floor and put it in the wash basket  – oh cruel mother that I am!)

Eventually after the pantomime he came over to hug me and apologise but there was some serious mother-son bonding needed so I suggested we go to Nando’s on the way home.

I had some photos taken with him – normally he is the one pulling faces so I didn’t tell him I was doing it – and it did bring the first genuine laugh of the afternoon from him when he reviewed the photos. 🙂 More photos, a chicken burger and fries and unlimited frozen chocolate yogurt and I think we are friends again. 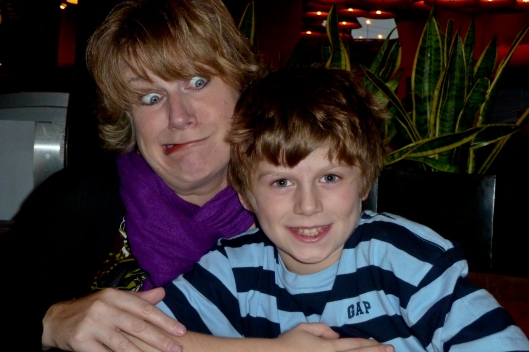 Lx despaired of me making silly faces – and Sx when he joined in!!

Dx of course finds it nearly impossible to look anything but cute in photos! 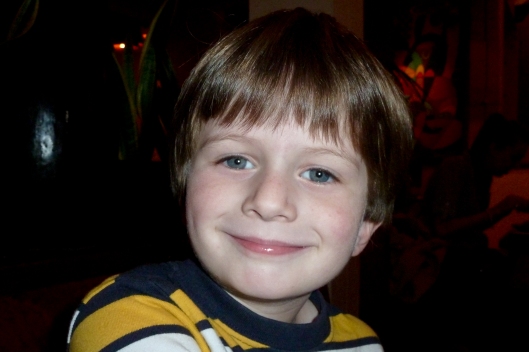 Home to see the outdoor lights up at the house for the first evening this year (the tree has grown since we last had them up – need more lights for it now!!) 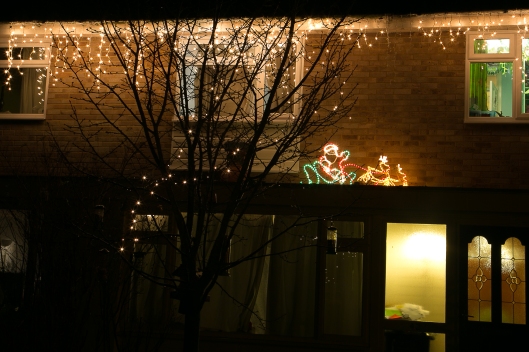 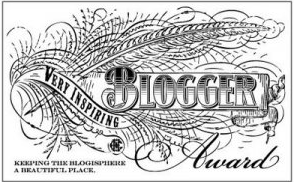 Have a look at…